Joseph Farah and WND maintain good Christian values while hosting one of the most popular news sites on the web.

News has never been as plentiful as it is right now. Everywhere we go on the internet, we find ourselves looking at what is happening in the world. Not only on the news channels and websites, but through social media, and even through entertainment. Social critique, politics, and world-views are clashing head-to-head all around us. Knowledge has never been more readily available, and truth has never been in greater scarcity.

For many believers, the issue has become “How do we stay connected to current events without being bombarded by the atheistic and materialistic propaganda that floods the news?” Thanks to the work of Joseph Farah and WND, many Christian now have a place to go where they can read the news without being deluged in mainstream, secular opinion. Here is their Mission Statement:

“WND is an independent news company dedicated to uncompromising journalism, seeking truth and justice and revitalizing the role of the free press as a guardian of liberty. We remain faithful to the traditional and central role of a free press in a free society – as a light exposing wrongdoing, corruption and abuse of power.

“We also seek to stimulate a free-and-open debate about the great moral and political ideas facing the world and to promote freedom and self-government by encouraging personal virtue and good character.”

There are not many news sources that put the words “good character” in their mission statement. WND (formerly WorldNetDaily) was started in 1997 by Joseph Farah and his wife Elizabeth. Since that time, WND has become one of the most influential news sites on the web, with over 5 millions users per month.

What is truly unique about Joseph Farah’s work is that, despite WND’s widespread success, the company continues to be dedicated to telling the truth while maintaining high moral standards and following the direction of a CEO who is a devout Christian.

If you are unfamiliar with Joseph Farah’s writing, we hope you get a chance to check out his new book The Gospel in Every Book of the Old Testament.

During the writing and research of Joseph Farah’s 2017 title, The Restitution of All Things: Israel, Christians, and the End of the Age, he began focusing on what Jesus called “the gospel of the kingdom.” He observed that most definitions of the gospel revolve around personal salvation, rather than worldwide redemption, on which the prophets of both the Old Testament and the New focused. He wondered if this “gospel of the kingdom,” which points to a future garden of Eden–style restoration of the world, could be the secret of finding the gospel in every book of the Old Testament.

“It was the spiritual mystery of the gospel of the kingdom that allowed me to find the gospel all over the Hebrew Scriptures,” Farah says.

Now Joseph Farah’s new book, “The Gospel in Every Book of the Old Testament,” dives deeper into this idea.

For the last five years, Joseph Farah and his wife, Elizabeth, have been leading tour groups to Israel to show them ancient prophecies being revealed before their eyes. The Bible promises a time of restoration in Israel and all over the world. But it’s very specific about Israel.

“I love to show people around Israel—starting with the ruins,” he says. “Every time we view the archaeological ruins, we see evidence of God’s judgment. Then, when we see the people returning to the land and the deserts blooming, we see the evidence of the restoration. Israel is like a laboratory of Bible prophecy confirmed. And when we see it confirmed in the judgment and the early evidence of restoration, we can then project ahead with near certainty that there is a greater restoration coming in the future. That’s the gospel of the kingdom.”

“It brings tears to people’s eyes when they see it for themselves,” he says. “They leave with the assurance, the knowledge, the certainty that the kingdom of God is coming to the earth in a real and powerful way—not just allegorically or spiritually.”

Join us on an upcoming tour to learn about the leading ideas from top scholars in Biblical research. Make your travels more than a vacation. Posted in Leader Intros and tagged In The News, Israel, Joseph Farah, WND 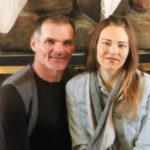 Why Should you take a Biblical Israel Trip?