This rare Biblical discovery contains words from 3,000 years ago! The name inscribed in this clay pot is referenced in ll Samuel, during the time of King David. Excavators carefully assembled this ancient artifact and were blown away to find the scriptural reference. Archeology News Report published this story recently, see what they have to say below or view their full story:

According to Professor Yosef Garfinkel of the Institute of Archaeology of the Hebrew University and Saar Ganor of the IAA, “This is the first time that the name Eshbaʽal has appeared on an ancient inscription in the country. Eshbaʽal Ben Shaul, who ruled over Israel at the same time as David, is known from the Bible. Eshbaʽal was murdered by assassins and decapitated and his head was brought to David in Hebron (II Samuel, Chaps. 3-4).

It is interesting to note that the name Eshbaʽal appears in the Bible, and now also in the archaeological record, only during the reign of King David, in the first half of the tenth century BCE. This name was not used later in the First Temple period.The correlation between the biblical tradition and the archaeological finds indicates this was a common name only during that period. The name Bedaʽ is unique and does not occur in ancient inscriptions or in the biblical tradition.”

According to the researchers, the fact that the name Eshbaʽal was incised on a jar suggests that he was an important person. He was apparently the owner of a large agricultural estate and the produce collected there was packed and transported in jars that bore his name. This is clear evidence of social stratification and the creation of an established economic class that occurred at the time of the formation of the Kingdom of Judah.

The full story is here.

Reference: Kantrowitz, Jonathan. “A Rare Inscription from the Time of King David was Discovered in the Valley of Elah .” Archeology News Report, 18 June 2015. Web. 07 July 2015. 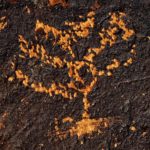 Har Karkom: Is Mount Sinai in the Negev, Arabia, or Egypt?