Study the Fascinating Biblical History of Ephesus in Person!

During our Bible study tours of the Seven Churches of Revelation, Ephesus is the most visual application for us to study and the church at Ephesus is addressed clearly in the Bible.  It is where John, one of the original Apostles, died and also where Jesus’ mother, Mary died.  Significantly, it is also the place where John wrote down the last book of the Bible, the Revelation of Christ, in or around the year 95AD.  The island of Patmos is only a few hours by boat from the closest current port.  John received the vision of the Revelation of Christ while on Patmos.  Secondly, not only did John write about the Church at Ephesus, but Paul did as well.  Paul wrote his famous epistle to the Ephesians in around 60AD.  The apostle Timothy was also in Ephesus, known by way of 1 and 2 Timothy.  During our tours of Ephesus, we will be able to have a greater understanding of the Biblical history of Ephesus and see why Ephesus was also geographically important.

In Revelation 2, the church of Ephesus was commended for the things it had done correctly.  Jesus tells them in the Revelation that He has something against them.  He said that they have left their first love and they should repent. In verses 4 and 5 of Revelation 2, He states that unless they repent and return to their first love, Christ, then He will remove their candlestick from its place. The implication seems to be that if they do not return wholeheartedly to their initial fervor as Christians, then they as a body of believers will cease to exist. It worth noting that the Church at Ephesus has indeed, ceased.

For those with extra energy at Ephesus, there is a 1.5 hour hike that can be taken to the cave above the archeological ruins of the city. This cave is traditionally known as the site where the Apostle Paul lived while at Ephesus.  From that vantage point, you will also be able to see the lines of the former harbor of Ephesus.

Partake in the Bible study journey of a lifetime and explore the most authentic Biblical locations throughout the Mediterranean!

Our authentic Christian travel experiences offer exclusive historical site access that you’ll only see on a Living Passages tour! Please visit our upcoming Bible tours page and our upcoming Christian cruises page to browse all the available trips we have scheduled for the next few years.

Have any questions about what to expect on a Living Passages trip or need help finding the perfect tour or cruise? Call us at 1-888-771-8717 or write us at [email protected] for more information! 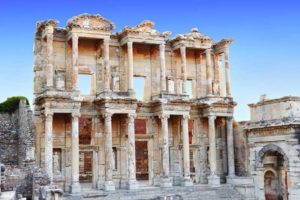