“His lord said unto him, Well done, thou good and faithful servant: thou hast been faithful over a few things, I will make thee ruler over many things: enter thou into the joy of thy lord.” – Matthew 25:21

When we think of famous Christian Reformers connected with Switzerland, there is a good chance that the first name to come to mind will be John Calvin. But Calvin wasn’t the only Reformation leader who fought to share the truth in Switzerland. William Farel, a contemporary and personal friend of Calvin, helped greatly in establishing the Reformed Church in Switzerland. Known early on as a public speaker renowned for his fiery oratories, his bold preaching made him the target leading to repeated assassination attempts.

As a public figure and Reformation leader embracing the teachings of Martin Luther, Farel fought tirelessly to bring the French speaking people of Switzerland to embrace the ideas of Protestantism. He helped establish numerous churches and aided in publishing Reformation books with the help of publisher Pierre de Vingle.

While passing through Geneva young John Calvin was introduced to Farel, who wished Calvin to stay with him in Geneva and help aid the Protestant churches. Calvin, more inclined to study that preach, told Farel that he did not feel he was suitable but the old Reformer literally shouted him down saying, “May God curse you and your studies if you do not join me here in the work He has called you to!” Calvin consented and the two began a lifelong friendship.

For the rest of his life, Farel continued to teach and share his mission with others. His work laid the foundation for the incredible changes John Calvin brought about in Geneva and influenced generations of Christians for years to come!

There are many heroes of the Reformation and we are so excited to be able to look at their work on our upcoming Reformation Tour. 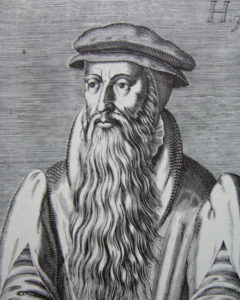