“…Hagar is Mount Sinai in Arabia…”

Galatians 4:25 is part of a somewhat complex theological analogy in which Paul is comparing the letter of the Law and the grace of God. His illustration contrasts the first two sons of Abraham— Ishmael and Isaac—and their respective mothers, and he mentions two locations: Mount Sinai in Arabia, and Jerusalem. While the particulars of the theological argument could fill pages, what we want to zoom in on is that Paul’s analogy is rooted in a simple geographical assertion: Mount Sinai is in Arabia.

What Were the Boundaries of Traditional Arabia?

Some followers have hastily assumed this implies modern-day Saudi Arabia. Others have countered by insisting that “Arabia” referred to a larger area in Paul’s day, which encompassed both the traditional site of Mount Sinai in the southern portion of the Sinai Peninsula and the more recently popularized site of Jebel al-Lawz in the northwest corner of Saudi Arabia. So much for simplicity! Far from resolving the debate, this seems to be just one more reason for proponents of their pet mountains to hurl scorn at each other, or for die-hard agnostics to shrug in hopeless resignation to perpetual uncertainty. Is there any historical evidence which might resolve this dispute of the ages?

Well, maybe not conclusively, but let’s blow the dust off of the writings of Agatharchides of Cnidus, a Greek historian and geographer whose works have been lost to the throes of time, except for a handful of passages preserved by later historians, such as Diodorus (49 BC) and Strabo (15 AD). In 169 BC, Agatharchides composed a work entitled, On the Erythraean Sea (commonly translated Red Sea), in which he demonstrates an understanding of “Arabia” that excludes the Sinai Peninsula.

In his work, he focuses instead on the eastern shore of the Gulf of Aqaba, which he called the Laeanites, “around which there are many villages of the so-called Nabataean Arabs. They occupy much of the coast and not a little of the adjacent country which extends into the interior and contains a population that is unspeakably great as well as herds of animals that are unbelievably numerous.”[1] This sounds like Midian. Could these Arabs also be Midianites?

Agatharchides of Cnidus observes that along the coastline, one can draw a line to “the so-called Rock [Petra] and Palestine to which the Gerrhaeans, Minaeans and all the Arabs, whose settlements are nearby, bring frankincense, as is the report, together with cargoes of incense from the upper country.”[2]

Descendants of Abraham Flourished East of the Gulf of Aqaba

This placement of Petra and the Nabataean traders in the region between the eastern coast of the Gulf (of Aqaba) and Petra is consistent with the accounts of other authors and details in Scripture. The first-century historian Josephus associates the Nabataeans with Nebaioth[3], the firstborn son of Ishmael (Gen. 25:13). According to the Lexham Bible Dictionary, “Prior to occupying Petra, the Nabataeans were a nomadic people. They flourished in Petra during the late Hellenistic and early Roman periods. Before the arrival of the Nabataeans, the region had been part of Iron Age Edom.”[4] The biblical account agrees; Nabataean Petra, which is called “Sela” in Scripture, is indeed associated with the Edomites in 2 Kings 14:7. This is no coincidence; Esau (of biblical Edom [Gen. 32:3]) had married his cousin, the daughter of his uncle Ishmael and the sister of Nebaioth (Gen. 28:8-9); the Edomites and Ishmaelites were now inextricably entwined.

Ishmaelites and Midianites Intertwined in Petra

But how does Midian fit into the drama? In Genesis 37:25-28, “Ishmaelites” and “Midianites” seem to be used interchangeably to describe the traders who bought Joseph from his brothers and sold him to Potiphar in Egypt. It turns out that Midian is another uncle of Esau, born to Keturah, whom Abraham married after Sarah died, and along with Ishmael, Abraham “sent them away from his son Isaac, eastward to the east country.” (Gen. 25:1-6). Petra and the east coast of the Gulf of Aqaba are in fact east of Canaan.

To tie all of this to “Sinai in Arabia,” it is important to understand that Agatharchides identified the home of the Nabataean Arabs as the land which seems to include Midian, and Jebel al-Lawz is situated just east of the center of the Gulf, along whose eastern shore they teem. So, while this doesn’t conclusively prove that Jebel al-Lawz is the true Mount Sinai, it certainly meets the location requirements based on the interrelations of the family groups described in Scripture, and it would unquestionably fit Paul’s description of “Mount Sinai in Arabia”.

See these incredible historical sites for yourself on an exclusive luxury tour to Saudi Arabia. Your knowledge and understanding of the settings and stories of the Bible will come alive through this unforgettable adventure. Experience sites mentioned in the bible along with commentary from one of our expert Christian Guides, Tour Leaders, and Teachers. Be treated to local cuisine, stay in comfortable 4-5 star hotels, and make new connections with fellow Christians joining you on the trip.

[3] “Nabataeans [were] considered to be descendants of Nebaioth, Ishmael’s oldest son (Gn 25:12–16; 1 Chr 1:29). According to the Jewish historian Josephus, Ishmael’s descendants inhabited an area all the way from the Euphrates to the Red Sea, calling it Nabatene. Their capital city, Sela, was called Petra in NT times.” (Walter A. Elwell and Barry J. Beitzel, “Aretas,” Baker Encyclopedia of the Bible [Grand Rapids, MI: Baker Book House, 1988], 168.) 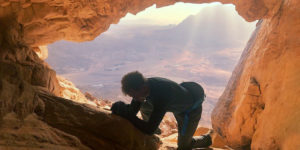