Our Greece and Turkey small ship Christian cruise itinerary visits small sites of Greece and Turkey including Miletus and Didyma.  We will have an up close visit  where Paul and the Apostles shared the gospel message.  One intriguing site we will visit is a place where an important ancient world oracle lived.  Didyma is one of those sites.  We will show you what is known as the “Didymean Apollo on Christ”.   We will see an oracle’s words on a stone inscription on our visit to Didyma (written in Greek) which says:

HE WAS A MORTAL ACCORDING TO THE FLESH, A WISE MAN WITH WONDROUS WORKS, BUT WHEN HE WAS SEIZED BY CHALDEAN JUDGES, NAILED WITH STAKES, HE FULFILLED A BITTER DEATH.

The oracles, which some considered prophetic,  eventually came to an end once Christianity became the legal religion in 313AD.  The oracle of the Temple of Apollo here was considered very important in 2AD.  It will be a lively, unique study of the beliefs in Christ of that day. 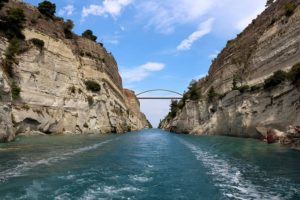 Posted in Christian Cruises and tagged Footsteps of Paul, Oracles