During our Footsteps of Paul Cruise we walk from the Acropolis down 16 well polished steps.  These steps are on a hill in Athens, Greece, called Mars Hill. Its Roman name is the Hill of Ares or Areopagus, meaning “rock.”  Ares was the Greek god of war and according to Greek mythology, and this hill was the place where Ares stood trial before the other gods for the murder Poseidon’s son Alirrothios.

Rising some 377 feet above the land below and not far from the Acropolis and Agora (marketplace), Mars Hill served as the meeting place for the Areopagus Court, the highest court in Greece for civil, criminal, and religious matters. Under Roman rule at the time of Paul, Mars Hill remained an important meeting place where philosophy, religion, and law were discussed. Acts 17:21-26.

Given Over to Idols

From Acts 17:16-18, we know that Paul’s spirit was provoked when he arrived in Athens and saw that the city was given over to idols. Epicurean and Stoic philosophers learned of Paul’s proclamation of the resurrected Jesus Christ and wanted to learn about the new doctrine he was teaching. They brought him to the Areopagus to hear more.

History shows that the Epicurean philosophy generally claimed that the main purpose of life was to gain modest pleasure from a state of tranquility, and to be relieved from bodily pain. They did not deny the existence of gods, but agreed that gods were not interested or involved with humanity.

Stoic philosophy claimed that the main purpose of life was to ascend above all things. They held a pantheistic view, which means that god is everyone and everything. Further, this view would claim that everyone and everything is god. Indeed, a slab of marble, a bird, and even human waste are all considered god from this point of view.

Epicurean, Stoic, and other philosophical schools had dramatically opposing worldviews and  loved to debate philosophy and religion. They were intrigued by what they considered Paul’s “babblings” about the resurrection of Christ, and brought him to the Areopagus.

The Unknown God of Athens

Many Athenians were obsessed with their religious traditions.  So much so, they made certain not to forsake any god by worshiping a deity known to them only as the Unknown God. They knew nothing of this God, but still they offered him their service and worship.

The once great City of Athens was on the decline. After the war with Rome in 164 BC, the once vibrant capitol of Greece was waning to a town of little more than 20,000, mostly poor people. Nonetheless, under Roman authority, Athens was given the status of a free city because of its widely admired schools, philosophy, architecture, art, and religion. This was the state of the city when Apostle Paul visited. Everywhere he turned, he saw statues of man-made gods.

Seemingly everywhere Paul looked he saw images of Zeus, Athena, Dionysus, and many other Greek gods. Paul was distressed because he knew that there is “only one Way to the Father.” One important monument that quickened Paul’s spirit was the Altar of the Unknown God.

I Know the Unknown God

Paul began his lecture with the observation that Athenians were religious with their objects and alters of worship, and yet they were ignorant of what or whom they worshiped.

Mars Hill is the location of one of Paul’s most important gospel presentations during his visit to Athens in his second missionary journey (Acts 17:16-34). There, he addressed the false beliefs of the Greeks who had an altar to an “Unknown God.” It was this altar and their religious idolatry that Paul used as a starting point in to present the gospel message to them. Paul proclaimed the one true God and taught the people how they may be reconciled.

The apostle Paul was trying to convey to people of Athens that the unknown God was not Zeus or some other deity, but the true God, Jesus Christ. The true God who created all things and every man.

Paul explained that the true, sovereign God created all things and gives life and breath to existence. He continued by explaining that it was God who created from one individual all men and nations and even appointed the time and boundaries of their dwelling. His message continued as he explained the closeness of God and the peoples’ need to repent of their rebellion against Him. Paul completed his message by introducing them to the One before whom they would all stand one day and be judged; Jesus Christ, whom God had raised from the dead.

Many people in the audience scoffed at the idea that Christ was crucified and rose from the dead on the third day, but a few believed.

Though only a few believed Paul’s message, this should be an encouragement to the modern Christian. In the face of apparent rejection of the Gospel by the masses, we are still called to share the good news.

Hardened hearts will scoff, searching hearts will ponder, and believing hearts will be saved. Rather than trying to discern the state of the hearer’s heart and tailoring the message to fit the hearer’s needs, today’s Christian must, in the spirit of Paul, passionately preach the truth of the Gospel in its fullness and leave the rest up to God. This is the essence of the Great Commission and is exemplified nowhere better in all of Scripture than in the account of Paul’s speech on Mars Hill.

Visit this incredible site today, and learn more about the amazing history of Christianity and the Footsteps of Paul. 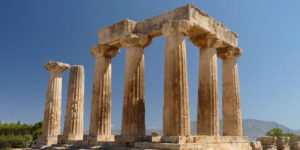