Corinth is famous for being the early church to which Paul wrote the letters of First and Second Corinthians, containing some of the most well-known passages in the entire Bible.

As Acts 18:4 says of Paul, “Every Sabbath he would argue in the Synagogue and would try to convince the Jews and Greeks”.  It was because of this that Paul was removed from the Synagogue and focused on the Gentiles.

Our visits to Corinth are a teaching highlight.  See an inscription showing where the synagogue of Corinth was located.  The inscription would be near the synagogue and near the house of Titius Justus where Paul stayed.   They say that this home may have shared a wall with the Synagogue as well. Also nearby is a stone with three menorah that is from about the 5th century AD.

Along with the letters Paul wrote to the church there, he also visited and helped to establish a community of believers in the city. The population was likely 750,000 or more in Paul’s time and the city was absolutely central to trade and commerce.

The size, historical significance, and Biblical importance of the city make it a crucial stop on any footsteps of Paul Greece tour.

The city was important in ancient times and the lessons and instructions Paul wrote to the young church are particularly relevant now, when the world is returning to an idolatry of immoral lifestyles.

The Troubled Church of the Corinthians in Corinth

In Paul’s time, Corinth was an important city in ancient Greece and it played a major role in his missionary work. Corinth was partially destroyed by the Romans in 146 BC, but in 44 BC it was rebuilt as a Roman city under Julius Caesar. The city prospered more than ever before and may have had as many as 800,000 inhabitants by the time of Paul. It was devoted to business and pleasure, and was mostly populated by freedmen and Jews.

Corinth had developed into a major government and commerce center of that region. Corinth was a commercial city, and derived its principal importance, its wealth, and its characteristics, from trade. At its peak, the city was known not only for its riches but also for its paintings and unique architecture. Building columns created in the Corinthian style were some of the most ornate in the ancient world.

Corinth was also known for its vices. Immorality and sexual sins were rampant, due in part to the pagan temple dedicated to the goddess Venus (i.e. it was dedicated to lust). The temple’s illicit services employed more than a thousand temple prostitutes by day, and as street prostitutes by night.

It appears from reading I Corinthians that the church there was negatively affect by the environment. Immorality and immodesty found their way into the church. The members were taking their grievances to courts, rather than working them out with one another. There were a host of other problems, such as issues around marriage, meats scarified to idols, women praying and prophesying with heads uncovered, the use of spiritual gifts, resurrection from the dead, and monies collected for the church in Jerusalem.

Paul had his work cut out for him! He committed his efforts to working with the Corinthians by speaking at synagogue weekly. He needed a place to live and a means of supporting his stay.

And he found a certain Jew named Aquila, born in Pontus, who had recently come from Italy with his wife Priscilla (because Claudius had commanded all the Jews to depart from Rome); and he came to them. So, because he was of the same trade, he stayed with them and worked; for by occupation they were tentmakers. And he reasoned in the synagogue every Sabbath, and persuaded both Jews and Greeks.

Corinth: The place Paul made tents with his “fellow laborers” Priscilla and Aquila in the Book of Acts.

Along the agora or marketplace of the city, Paul, Priscilla and Aquila worked as tentmakers.  The tents were most likely important because the city of Corinth hosted something similar to our Olympic games during that time, called the Isthmian games. The sale of the tents created the finance Paul needed for his ministry. These Isthmian games brought thousands of guests to the city for musical, physical, oratorical and intellectual competitions.

It was due to these crowds of available guests that afforded Paul the occasions to speak and teach in the agora, the synagogue and finally the place of the Bema platform where the pro-consul dismissed the charges against Paul.

The Bema Where Paul Stood Trial

Our Corinth Bible tours on our “Footsteps of Paul” Christian cruises spend quality study time on the period after Paul had spent 18 months in the city of Corinth. At that time, the Jews were able to convince the then pro-consul, Gallio, to charge him with various crimes that they deemed to be criminal.  The place of the important Bema exists today and we will have an opportunity to meet and study at the site together. This site is a platform where Paul was made to stand and where the charges were brought against him.  Praise God that Gallio saw through the charges and found that it was a dispute the Jews had of Jewish law and were not of a criminal nature. The ruler of the synagogue at that time was Sosthenes who was later beaten.  Sosthenes in 1 Corinthians 1:1 is also called Paul’s friend.  We will also clearly see the entrance to this same synagogue during our Corinth Bible tour.

Acrocorinth: The Ancient Fortress and Temple of the Corinthians

High above the city of Corinth, there is a steep rock that overlooks the town. Rising 1800 feet above the plains, Acrocorinth was once the seat of the Temple of Aphrodite, the Greek goddess of love, whose worship contributed to the sexual immorality that Corinth was infamously known for.

Erastus, the Chamberlain of the City

Paul had many friends in Corinth and one of the friends is named in Roman 16:23 was “Erastus the chamberlain of the city”. What is interesting about Erastus is that his existence seems to be confirmed by an inscription found east of the theater in Corinth. The inscription reads, ‘Erastus for his aedileship paved (this) at his own expense.’ Erastus seems to have been a man of wealth and position and was a friend of Paul’s, who contributed to the improvement and infrastructure of the city.

The Synagogue of Corinth

The synagogue of Corinth was a hub of public debate when Paul came to the city. Acts 18:4 says “Every Sabbath he would argue in the Synagogue and would try to convince the Jews and Greeks”. It was because of Paul’s relentless preaching that the Corinthian Jews hatched their plot to put Paul on trial before the Roman Pro-consul Gallio.

The Port of Cenchreae

Like several other Biblical figures, the apostle Paul dedicated himself to the Lord with a Nazarite Vow. According to the book of Numbers, those who took a Nazarite Vow were not to:

When Paul stopped at the port of Cenchreae it was, according to the book of Acts, to have his head shaved in keeping with his vow. Biblical historians are unsure of whether Paul was beginning or concluding his vow in Cenchreae, but we know from archaeology that Cenchreae was a port city just outside of Corinth. The submerged remains of the Cenchreae Synagogue can still be seen from the shores.

Corinth is frequently chosen as a teaching destination by leaders on a footsteps of Paul Greece tour. The many points of Biblical and historical interest the city has to offer make it an ideal spot for teaching and instruction. 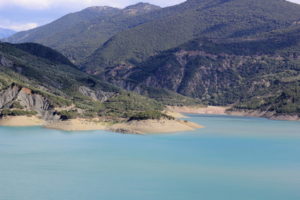